Florida citrus growers who manage against steep odds to produce oranges, grapefruit and tangerines this winter and spring will see some of it fall to the ground and rot — but not because of severe weather or a calamitous epidemic of citrus greening.

It will go to waste because they can’t sell it.

For growers still hanging on, this may prove to be one bad season too many.

“For the first time in I don’t know when, there is a distinct possibility that a portion of our crop will hit the ground without being harvested, on a statewide basis,” said citrus grower Ben Albritton, a south Florida Republican and chairman of the Florida Senate Agriculture Committee.

“The most significant challenge we have today is actually not citrus greening. It is our marketplace.”

Albritton spoke during a recent meeting of the Agriculture Committee.

After nearly two decades of setbacks and despite two recent years of rebounding, more growers will give up, Albritton said.  They can’t afford to keep irrigating and treating their groves without selling its fruit, and they can’t afford not to do those things while waiting for the market to improve because citrus greening will finish off their trees.

As much as one-sixth of Florida’s next citrus harvest is “naked” – having no contracted buyer – because traditional buyers are locked into contracts with foreign growers who had fruit to sell at a time when Florida did not.

When Hurricane Irma destroyed Florida’s crop in September 2017, the loss forced makers of big brands such as Minute Maid and Tropicana to look elsewhere that year to supply their citrus product lines. Growers in Brazil and Mexico supplied the needed fruit, but they required the companies to buy from them for three to five years, not just one or two, Albritton said.

That leaves a large share of Florida’s remaining growers, who are expected to produce 74 million 90-pound boxes of citrus this season, hurting for buyers until those major contracts offshore expire. The crop will be slightly greater than last year and the year before, according to a 2019-20 forecast issued Oct. 10 by the National Agriculture Statistics Service.

“We rebounded quicker than expected. And they (buyers) were already bound to importing that supply from Brazil and Mexico,” said Andrew Meadows, spokesman for Florida Citrus Mutual, the state’s citrus trade association. “It’s a very difficult time for the industry.”

How much fruit may go to waste? And how many growers may walk away from an industry still worth $7.2 billion and employing 50,000 people?

“That’s the unknown,” Meadows said in an interview with the Florida Phoenix. “We’re still early in the season.”

Underlying the challenge in finding buyers are a decline in the popularity of orange juice and a deadly epidemic of citrus greening, an imported bacterial infection spread by an Asian insect that is difficult to prevent and, so far, impossible to cure.

Scientists are looking for solutions, but so far the best advice has been to destroy infected groves and replant with more resistant strains. For many growers, the cost of that option is prohibitive.

Citrus greening, found in groves around the world, broke out in south Florida in 2005 and quickly spread throughout the state’s citrus zones, slashing production by about two-thirds: from 240 million 90-pound boxes a year to a little over 70 million boxes. Acres in production fell from 700,000 in 2000 to 450,000 in 2017. The number of growers withered, according to the Florida Citrus Commission, comprised of growers, processors and packers.

Meanwhile, consumer demand for orange juice, the superstar of the citrus industry, shrank by about two-thirds as well amid concerns about its sugar content in a market keen on sports beverages and flavored water.

Albritton said the average consumer in years past drank nearly six gallons of OJ a year, down to less than two gallons now. He wants to see major advertising to counter the decline by stressing the nutritional value of no-sugar-added orange juice, which contains high natural concentrations of vitamin C, folate and potassium.

Parodoxically, funding for advertising is down, too. The Florida Citrus Commission self-assesses 7 cents on each 90-pound box of citrus to pay for marketing. With production low, marketing revenue from the box tax is low, too.

“The commission is now debating whether that should go up,” Meadows said of the box tax. “Our best and brightest are looking at whether we can market our way out of this.” He said he expects the commissioners to vote in coming weeks or months on increasing the box tax.

Albritton said it will take a big infusion to make an appreciable difference.

It amounts to a perfect storm for the citrus industry.

Growers who endured through citrus greening, decline in demand, and Hurricane Irma may not be able to hang on while Florida’s traditional buyers fulfill contracts with Brazil and Mexico.

“Citrus in Florida is an immense struggle,” Albritton said. “There are people all over the state turning the switch off today on irrigation and fertilizer and those things because they don’t have a crop sold.

“What we’ve seen, because of market pressures, is people walk away from taking care of a grove. And you can’t just put fertilizer on it again in two years and kick-start it. With citrus greening, it will collapse. You can’t just walk away and restart.

“This will be the season, not ‘the season’ as in a single season, but a stretch, a season of time, when whoever’s going to survive in the citrus business will come out the other end – and there’s going to be lots of people who don’t. And that’s a fact.”

Sen. Doug Broxson, a northwest Florida Republican, and others who serve with Albritton on the Senate Agriculture Committee said lawmakers and the industry must work together to keep the Sunshine State’s signature crop alive. He said he is “very disappointed” to find it in dire straits.

“We knew as the 17th largest economy in the world that we would have some hiccups in our economy over a period of time. I’m very disappointed that we have not allocated enough money to do a 9-1-1 about our citrus industry, where we could tap into those monies that we’ve spent for the last 10 to 15 years, to tell people about who Florida is and our overall product, not only tourism but things like our citrus economy,” Broxson said.

At Florida Citrus Mutual, Meadows clings to optimism despite 15 years of difficulties, any one of which could have been pivotal for the industry.

“It’s been a ‘pivotal year’ for us for the last decade and a half,” Meadows said. 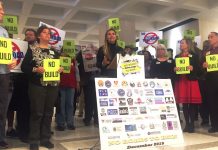 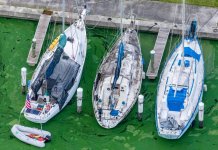