Spiking incidence of heat stroke and heat exhaustion among U.S. service personnel is requiring military leaders to ramp up prevention and response, according to a report published this year by the Armed Forces Health Surveillance Branch.

That’s because of climate change, which will compound extreme heat by mid-century in the absence of rapid action to limit global warming, the Union of Concerned Scientists reported this week.

“With no action to reduce global heat-trapping emissions, on average, by mid-century U.S. installations would experience nearly five times as many days with a heat index above 100 degrees F as they have historically,” writes Kristy Dahl, senior climate scientist for the Union.

The growing risk of heat illness is greatest for young recruits in the Marine Corps and the Army. At the eight basic-training installations in the United States, conditions will add six weeks of extreme heat (heat index above 100 degrees F) by mid-century, the Union forecasts.

“Heat illnesses can degrade U.S. military effectiveness by causing considerable morbidity, particularly during training of recruits and of soldiers and Marines in combat arms specialties,” the Armed Forces health report says. It describes extreme heat as “a significant threat to the health and operational effectiveness” of the Armed Forces.

The report documents steady increases in heat illness between 2014 and 2018. The number reached nearly 2,800 cases last year among active-duty members, only 67 of which occurred in Iraq or Afghanistan. The report calls for increased real-time reporting to monitor the situation and adapt to it.

While five of the six U.S. military bases most experiencing rising heat are in Florida, cases of personnel succumbing to extreme heat were concentrated in basic-training installations throughout the Southeast, according to the Armed Forces health report. Those installations are Fort Benning, Ga.; Fort Bragg, N.C.; Camp Lejeune and Cherry Point, N.C.; Fort Campbell, Ky.; and Fort Polk, La.

Under existing trends, extreme heat days at Florida’s Air Force and Navy bases would rise by 73 to 102 days a year by mid-century, the Union forecasts. Homestead Air Reserve Base and MacDill Air Force Base are near the 100-day mark.

With rapid action to resist global warming, increases in the number of extreme-heat days can be contained, although not stopped, the Union concludes. For example, at Homestead and MacDill, extreme heat days by mid-century could be held to 80-plus per year, instead of the projected 115 and 116 in the absence of climate-change action. 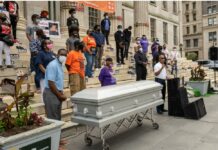 Housing advocates fighting evictions during COVID are eager for the new...