“You and Mr. Trump don’t want anyone who looks or talks differently than Caucasian Americans to be allowed into this country,” Rep. Debbie Wasserman Schultz said during a blistering exchange with Ken Cuccinelli, acting director of U.S. Citizenship and Immigration Services, the branch of the U.S. Department of Homeland Security that oversees immigration.

“You want to block all immigration and make life harder for immigrants, and you have demonstrated that you will pursue this heinous white supremacist ideology at all costs.”

“I am not a white supremacist, as you alluded,” he said. “Nor is the president.”

Wasserman Schultz spoke during a House Oversight and Reform Committee hearing on a Trump administration policy that could lead to the deportation of sick children.

She pointed to comments the Virginia Republican made in August, when he reportedly added a controversial caveat to the famous stanza at the base of the Statue of Liberty, which reads: “Give me your tired, your poor, your huddled masses yearning to breathe free.”

In comments to news organizations, Cuccinelli reportedly said: “Give me your tired and your poor who can stand on their own two feet, and who will not become a public charge,” adding later that the poem refers to “people coming from Europe.”

His comments referred to a new “public charge” rule under which the federal government would take immigrants’ past use of Medicaid, food stamps, housing vouchers, and other social services into account when making decisions about whether immigrants qualify for legal residency.

The new rule would require immigrants to show a higher burden of proof that they won’t become public charges.

The policy was set to take effect earlier this month, but it has been blocked in the courts.

Wasserman Schultz is chief deputy whip of the House Democratic Caucus and previously served as chair of the Democratic National Committee. She represents Florida’s 23rd congressional district in South Florida and is the state’s first Jewish woman member of Congress.

During the hearing, committee members also pressed administration officials on their “refusal to comply” with document subpoenas issued by the late Rep. Elijah Cummings of Maryland, who chaired the committee until his death this month. Cummings issued the subpoenas in his “last official act” before he died.

Correction: This story has been corrected to note that Debbie Wasserman Schultz is Florida’s first Jewish woman member of Congress. 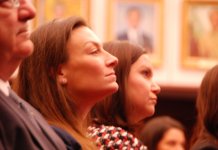