The Florida Senate convenes in special session today – under the cloud of a death threat against a hearing officer – to decide whether to reinstate Broward County Sheriff Scott Israel, accused of incompetence for his officers’ handlings of two mass shootings.

The case is important not only about the fate of an elected official, but the actions by Gov. Ron DeSantis, whose power could be seen as eroded if Israel wins reinstatement.

In those shootings, 17 students and faculty were shot to death Feb. 14, 2018, at Marjory Stoneman Douglas High School in Parkland, and five people were fatally shot Jan. 6, 2017, at Fort Lauderdale-Hollywood Airport.

In a flurry of late filings Sunday, the governor introduced an affidavit bolstering his case against Israel, who is recommended for reinstatement by the Senate-appointed hearing officer, Special Master Dudley Goodlette.

In the affidavit, the executive director of the Commission for Florida Law Enforcement Accreditation states the commission found failures in the way sheriff’s officers handled the shootings and unanimously voted in June not to re-accredit the Sheriff’s Office.

In contrast, the commission praised new Sheriff Gregory Tony this month for making improvements intended to restore the accreditation next year.

“We thank you. Because we never want that to happen again. Ever,” said Commissioner Larry Ashley, sheriff of Okaloosa County.

State authorities reported Friday that a death threat was made against Goodlette shortly after he found in Israel’s favor.

In his Sept. 24 report, Goodlette concluded the sheriff and his officers were “not blameless for the tragedy” but that the governor’s case against Israel was not sufficient to remove a constitutional officer from his elected office.

She was suspended on Jan. 11, the same day the governor suspended Sheriff Israel, but she fought back, was reinstated in July and has since resigned. The resignation allowed Jackson to get lucrative retirement benefits.

The Senate’s job now is to support the governor’s suspension of Israel or support the special master’s recommendation to reinstate him.

Sheriff Israel has labeled his suspension “as a political tool by Governor DeSantis to secure financial and political support,” records show. 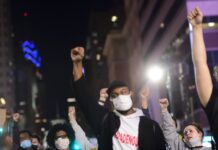 A harsh reality: DeSantis’ anti-protest law means protesters of all kinds must be careful or land in jail

A harsh reality: DeSantis’ anti-protest law means protesters of all kinds must be careful...