The Florida Democratic Party has delivered a public records request to Gov. Ron DeSantis, seeking any communications between him or his office with Rudy Giuliani and other people involved in alleged campaign finance violations.

A letter, sent Wednesday over party chairwoman Terri Rizzo’s signature, seeks documents “evidencing any communications to, from, or between you or your office, and Lev Parnas, Igor Fruman, Rudy Giuliani, or Global Energy Producers.”

“There are still a lot of questions DeSantis has yet to answer regarding his relationship with these men – and what was asked by him of these men for the money he received,” Rizzo told the Florida Phoenix via email Thursday. “Floridians deserve to know if their governor is compromised in any way to these shady individuals.”

DeSantis has acknowledged an acquaintance with Parnas, arrested with Fruman in New York last week as they prepared to board a one-way flight to Vienna, but said, “I didn’t know the other guy as much.”

Parnas reportedly hosted two fundraisers during DeSantis’ gubernatorial campaign last year, and the governor has disgorged a $50,000 campaign contribution Parnas and Fruman made through Global Energy, which federal authorities allege was a shell company under their control.

Authorities have made a total of four arrests thus far. Additionally, Parnas and Fruman have been implicated in efforts by Giuliani to pressure the Ukrainian government to provide discrediting information about former Vice President Joe Biden and his son Hunter to benefit President Trump, with whom DeSantis is close politically. Giuliani, the former mayor of New York City, was acting as Trump’s private attorney.

“This was a guy who, you know, at RNC functions, Trump victory functions – I mean, he was at a lot of these things, was I think viewed as one of the top supporters of the president in Florida. And so it was just like any other donor. Nothing more than that,” DeSantis said of Parnas Wednesday. 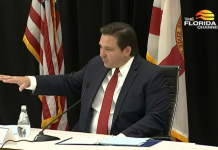 The Florida Supreme Court: A male bastion with one woman and...

Looks like Florida will escape worst of Hurricane Dorian