The Florida Department of Environmental Protection (DEP) announced this week that it will use most of the $166 million it received in Volkswagen settlement money to replace diesel buses and shuttle vans with electric models.

It’s part of what Gov. Ron DeSantis is calling the “beneficiary mitigation plan” intended to improve the state’s air quality.

“My administration is committed to making smart investments to help improve our state’s air quality long-term,” DeSantis said in a written statement.

“This funding will allow us to focus on projects that will reduce harmful emissions, help modernize school and transit bus fleets, and provide access to charging stations in our state as electric vehicle usage continues to increase.”

The DEP announced on Oct. 8 that it was issuing three “requests for Information” to companies hoping to implement the programs with VW settlement funds.

The state will use the vast majority of that money – $116 million – on a bus replacement initiative for school, transit, and shuttle buses; $24.9 million for electric vehicle charging stations; and another $24.9 million for a DEP program that helps diesel vehicle operators update their fleets to meet tougher post-2006 emission standards.

Some $5 million of that $116 million will help districts replace older diesel school buses with electric buses.

The funds are part of a settlement agreement the U.S. government reached with Volkswagen involving alleged violations the U.S. Clean Air act. The company agreed to spend up to $14.7 billion nationwide to resolve accusations it cheated on emissions tests and deceived customers.

The DeSantis announcement was “a victory for climate change,” said Aliki Moncrief, of the Florida Conservation Voters.

Susan Glickman of the Southern Alliance for Clean Energy was a little less enthusiastic, calling it an “incremental move in the right direction.”

She said: “It’s good to see the DeSantis administration make $5 million of the $116 million from the VW Emissions settlement available for electric school buses, but the question remains whether the rest of the funds will go to clean electric vehicles or polluting ones.”

Phil Compton of the Florida Sierra Club expressed similar reservations. The plan, he said, could allow the administration end up funding buses that run on compressed natural gas. Burning natural gas emits less carbon dioxide than diesel, but its production results in leaks of methane, a potent greenhouse gas.

Local governments in Florida are moving to zero emission buses. Last week, the Miami-Dade County Commission approved the purchase of 33 battery-electric buses, the largest electric bus order on the East Coast, according to Masstransitmag.com.

The county also is installing as many as 75 plug-in chargers to support expansion of its electric vehicle fleet.

One year ago, the Pinellas Suncoast Transit Authority introduced eLooper service to downtown St. Petersburg with the first of six electric buses planned for purchase with city, county, state, and federal money during the next couple of years. 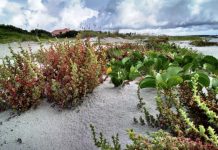 Visitors flock to national parks after Trump waives fees; FL and other states close their parks

Facing a big hit from the coronavirus, Florida lawmakers are expected to approve a $93.2 billion state budget

A tiny provision slipped into a new election law could block...

Florida Dems get schooled on how to be winning candidates