WASHINGTON — All but one Florida lawmaker in the U.S. House voted on Wednesday to block oil and gas leasing off of Florida’s Gulf Coast.

The House voted 248-180 to pass  H.R. 205, a proposal from Rep. Francis Rooney (R-Fla.) that would block oil and gas leasing in the Gulf of Mexico off the coast of Florida. There is already a moratorium on oil and gas drilling in the eastern Gulf of Mexico that expires in June 2022. This bill would permanently extend it.

Florida Republican Rep. Ted Yoho was the only member of Florida’s 27-member House delegation who voted against the bill. Florida’s 13 Republicans were among the 22 GOP lawmakers who voted for the bill.

Florida Republican Sens. Marco Rubio and Rick Scott are sponsors of legislation in the Senate that would ban drilling off of Florida’s Gulf Coast until 2027.

The House also voted 238-189 on Wednesday to pass H.R. 1941, the Coastal and Marine Economies Act, which blocks the Interior Department from seeking any new drilling off the Pacific or Atlantic coasts. All of Florida’s House Democrats and six Florida Republicans voted in favor of that bill.

The House bills would put in place far-reaching new protections, blocking drilling off most of the Atlantic and Pacific coasts. Lawmakers are scheduled to vote Thursday on a similar ban for drilling in the Arctic Ocean. The efforts take aim at the Trump administration’s push to open up vast new areas of the U.S. coasts to oil and gas exploration.

But the sweeping proposals face an uncertain future. It’s unlikely that Republican leadership in the Senate will act on the legislation and the White House has threatened to veto the bills.

Without any new protections in place, states including Virginia, North Carolina, Florida, Georgia, Maine, Maryland and other coastal states could see a number of new lease sales in the coming years.

Lawmakers on both sides of the aisle have pushed for measures that would limit drilling along their own state’s shorelines.

Mast said in a statement that drilling near Florida coastlines “will not be tolerated.”

Florida Democratic Rep. Ted Deutch said: “As President Trump tries to make it easier to open up our shoreline to drilling, Democrats and Republicans are together standing against such a misguided and dangerous move.”

The Trump administration has pushed for massive new oil and gas exploration in ocean waters, as part of the administration’s “all of the above” energy policy. The Interior Department regularly drafts new five-year plans for oil and gas leasing.

The Trump administration’s proposal for 2019-2024 would open up drilling up and down the West Coast and Atlantic Seaboard, including some areas that have been closed for decades. Interior Secretary David Bernhardt put a pause on those plans while the administration litigates whether some areas should be open to drilling. But in the meantime, opponents of drilling want to block future development.

Then-President Barack Obama banned drilling in canyons of the Atlantic Ocean and vast parts of the Arctic Ocean. But President Donald Trump signed an executive order in 2017 to throw out those drilling bans. Environmental groups have challenged the Trump drilling plans, and they are still tied up in court.

The Coastal and Marine Economies Protection Act would permanently remove from consideration acreage for offshore leasing on both the Atlantic and Pacific outer continental shelf. Lawmakers accepted an amendment from Rep. Andy Levin (D-Mich.) and  Rep. Don Beyer (D-Va.) that also puts a moratorium on oil, gas and methane seismic activities.

“At a time when global temperatures are steadily rising and the habitats of imperiled species are increasingly unstable, we have every reason to ensure the health and security of our coastlines,” Beyer said in a statement. “Congress took a major step today to preserve those coastlines and push back against yet another handout from the Trump administration to the fossil fuel industry.”

Some Republicans warned that the legislation would clamp down too hard on energy development.

Rep. Ben Cline (R-Va.) said that developing oil and gas resources off the Virginia coast could “bring thousands of jobs to Virginia and significantly boost its economy.”

Cline said it’s “fine” if other states don’t want drilling revenue. “But the federal government should not be in the business of halting Virginia — and in turn America’s — economic growth,” he said. “Failing to give states like mine the ability to explore the resources off our coast would be a grave disservice to my constituents, our Commonwealth and our nation.”

Rep. Buddy Carter (R-Ga.) said “blanket bans” that would be imposed by this legislation are “misguided and are quite plainly the wrong approach.”

Carter has asked the administration to remove Georgia from consideration for offshore exploration, but he said states ought to be empowered to make their own decisions.

Environmentalists applauded the legislation, which they say will help protect oceans, marine life and coastal communities from the pollution that comes with offshore drilling and development.

“Legislating to prevent offshore drilling is important, especially now, given that the Trump administration has proposed the most extreme offshore drilling we have ever seen,” said Alexandra Adams of the Natural Resources Defense Council. “Members of Congress acting swiftly and quickly now is really critical.”

House lawmakers have also included amendments in their annual Interior Department spending bill that would block offshore drilling along most U.S. shores in 2020.

“Offshore drilling threatens the local wildlife and water of communities in South Carolina and across the country while also undermining economic opportunity,” O’Rourke said in a news release. He has made five campaign trips to South Carolina, an early voting state.

The lead sponsor of the bill to ban offshore drilling, Rep. Joe Cunningham (D-S.C.),  leveraged his opposition to offshore drilling in his 2018 campaign, when he flipped a seat that had long been in Republican control. Cunningham’s district includes Charleston, S.C., and stretches along the coastline. 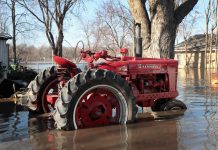 Fauci warns that reopening too soon could cause ‘suffering and death’