UPDATE: GateHouse purchased Gannett on Monday, shortly after this column was published.

Florida’s journalism picture may be about to change dramatically.

A merger between America’s two biggest newspaper companies – GateHouse and Gannett – could be announced soon. If it happens, the majority of newspapers in the state will be owned by a single company.

Media monopolies like this used to be illegal, but the government weakened regulations, and media companies – especially the conservative broadcasting company Sinclair – have used various strategies to get around what rules still remain.

If the merger goes through, the only major outliers from the Gannett-GateHouse monopoly on Florida news would be the independently-owned Tampa Bay Times; the Orlando Sentinel and the South Florida Sentinel. (owned by the Tribune company); and the Miami Herald and Bradenton Herald (owned by the McClatchy company). Smaller independent weeklies, dailies, and alternative papers are scattered in parts of Florida. And of course there are the new digital-only state news operations, like the Florida Phoenix, the News Service of Florida, Politico Florida, Florida Bulldog and Florida Politics.

Missing local newspaper journalism in your town? It’s probably going to get worse. These companies are into centralizing operations, and that means news from elsewhere will continue to pad your emaciated local daily.

According to a story in USA Today – Gannett’s flagship newspaper – the combined company would operate more than 260 daily news operations across the U.S. “more than any other U.S. news publisher. And it would vie for claiming the largest online audience nationally of any news provider.”

Pair that newspaper market dominance with the nationwide local TV news station takeover by conservative giant Sinclair Broadcasting and the radio station conglomerate iHeart Radio, and the picture is troubling.

“Sinclair’s stations—there are often several in the same broadcast area, branded as local ABC, CBS, NBC, or Fox affiliates—enjoy the trust of viewers because they appear independent, even though much of the content is dictated at a national level,” Sheelah Kolhatkar reported in an eye-opening New Yorker magazine story.

Kolhatkar writes that a former Sinclair news director says the company’s leader, David Smith, “purposely went in and bought a whole bunch of stations in mid-America—i.e., Trump kinds of towns. Places where they could have a big influence.” The news director added: “I don’t care what your politics are—the bottom line is, they hatched a plan to have an effect on the majority of this country. And, when you look at it, I’m positive the right-wing commentaries, in small markets, had an effect on the election.’”

Afterward, former CBS newscaster Dan Rather wrote on Twitter: “News anchors looking into camera and reading a script handed down by a corporate overlord, words meant to obscure the truth not elucidate it, isn’t journalism. It’s propaganda. It’s Orwellian. A slippery slope to how despots wrest power, silence dissent, and oppress the masses.”

It’s estimated that Sinclair reaches 40 percent of American households. The company hired Boris Epshteyn, a Russian-born former Trump-campaign and administration official to do regular pro-Trump commentaries and beam them out to stations.

Broadcast news remains profitable and popular, even if the quality is spotty. As for newspapers, everyone knows the business is as healthy as a hooked fish on a boat deck. It’s heartbreaking that, at the time we need local newspaper reporters more than ever, fat cats are buying and eviscerating news institutions. At newspapers, the number of newsroom employees dropped by 47% between 2008 and 2018, from about 71,000 workers to 38,000, according to the Pew Research Center.

Hedge funds own newspapers these days. GateHouse is a division of the Fortress Investment Group, which has financial services, golf courses and private railroads in its portfolio, a University of North Carolina study says. The newspapers are less than two percent of the company’s $70 billion revenue, the study reports. “GateHouse aggressively manages its portfolio of papers, selling, closing and merging under-performing papers.” the study explains.

People always ask journalists what we think the future of the business is. I always say we have no idea, that we’re in the “not knowing” of the Information Age. Nonprofit online news operations like the Phoenix may, indeed, be the future. Or maybe something else is on the horizon.

I got into the newspaper business as a young person because I thought it was one of those reliably essential jobs, like being a cop or a nurse. People, I reasoned back then, would always – always! – need their newspaper. 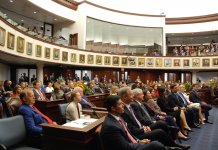