Hell, yeah, teachers should be armed. It would totally cut down on the whining about next week’s trigonometry test.

And that kid Dwight? Next time he mouths off, I’m going to pull the Glock 9mm out of my paperclip drawer and say, “Hey, Dwight: Why don’t you shut up and solve that quadratic equation? Make sure you show your work.”

But true Constitutionalists have waited a long damn time for Senate Bill 7030 , which would let us educators pack some decent heat. Those socialists from the teacher’s union can just shut the hell up. Those wussy parents, too, and their snowflake kids who’d rather take coding than shop class. All of ‘em brainwashed to hate the Second Amendment.

OK, teachers who love firearms are a pretty small minority, but so what? Davy Crockett didn’t need a whole army to whip undocumented Mexican butt at the Alamo, did he?

I figure me and Coach Wieszneski won’t have any trouble taking out Islamist terrorists (if any of them ever dare saunter through the gates of George A. Custer Middle School) or a ‘roid-raging offensive lineman whose girlfriend just dumped him, or one of those hopped-up incels who can’t get a date, but can get himself a sweet Romanian AK-47.

Things might get a little messy during the siege in the cafeteria, but the point is, we should be grateful to live in a country where all you need to get a gun is a credit card and a pulse.

Big MAGA- thanks to state House Education Chair Jennifer Sullivan for refusing to listen to the firearm-hating Florida Education Association pussies and their pals in the Democrat Party.

Chairwoman Jennifer knows more about patriotic education than some nerd with a Masters. She attended Liberty University for an entire semester in 2011.

On the other side of the Capitol, senators like Dennis Baxley are standing their ground on the right of educators to deploy granddaddy’s thirty-aught-six in the name of protecting the children: “If you’re charged with their safety we should not ask them to charge hell with a water pistol.”

We’ve got us a good friend in Sen. Kelli Stargel, too. When she’s not defending sweet little babies getting aborted by their slut mothers, she’s fighting so that your kid’s Language Arts instructor can whip her SIG Sauer P238 out from behind that copy of Huckleberry Finn and confront a shooter hell-bent on wasting half the debate team.

If only the teachers at Marjory Stoneman Douglas had been carrying, says Sen. Stargel, “they would be alive today and so would many other students.”

She added: “That sends chills up my spine.”

Some punk with a piece walks into my school and starts firing? I’m not going to just dial 911 and hope the local cops will tear their fat asses away from the donut shop in time to plug him. Me and Coach–and maybe Ms. Loman the librarian, who I happen to know owns a nice little Colt Mustang XSP she uses to shoot squirrels–will go on the offensive.

Me and Coach have had the training. I’m not sure about Ms. Loman, but I happen to know she’s seen every single Die Hard movie.

We’ve heard all the nay-saying and bitching about guns left in the bathroom or the possibility of a teacher accidentally putting a bullet in one of their own students and law enforcement not knowing which shooter was, you know, the shooter, and kids stealing guns and firing at the principal.

Load of crap. As President Trump says, “A gun free zone–to a killer, that’s like going in for the ice cream.”

You let us bring our firearms to school and as President Trump also says, teachers are going to take care of the punk: “You come into our schools, you’re going to be dead.”

That’s what I call a healthy learning atmosphere. 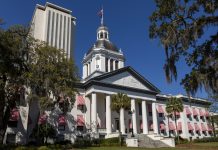 Somebody’s lying here. Whoever could it be?