Republicans and Democrats laid out dramatically different visions for Florida on Tuesday, the first day of the 2019 legislative session.

In his inaugural State of the State speech, Republican Gov. Ron DeSantis laid out his conservative agenda which toes a hard line against immigration; he spotlighted in the audience the parents of a Jacksonville man who he said was killed by an undocumented immigrant.

DeSantis owes much of his political success to Donald Trump campaigning for him, but the governor only mentioned the president’s name once: when talking about federal help for Hurricane Michael victims.

The biggest applause in the Republican-dominated Legislature came when DeSantis criticized New York and Virginia for recently passing laws that aim to preserve a woman’s right to choose to end her pregnancy in the event that Roe v. Wade (the case which legalized abortion) gets overturned by the U.S. Supreme Court. State lawmakers – who this year will consider some of the most extreme anti-abortion measures ever introduced in the Legislature – rose to a standing ovation. DeSantis has pledged to sign the most extreme anti-abortion bill if the Legislature passes it.

Just after taking office last month, DeSantis packed the Florida Supreme Court with conservative-leaning justices, setting off alarms that the new jurists would be more likely to let anti-abortion legislation stand. In the past, the state Supreme Court has struck down abortion restrictions, citing the state Constitution’s privacy clause.

Meanwhile, Democrats say they will spend the session advocating a set of priorities for the state they are calling a “Sunrise Agenda” – which will face an uphill climb in the conservative Legislature.

“For too long, hard-working Floridians have been struggling to make ends meet, while the wealthiest and the well-connected among us have rigged the rules to benefit themselves,” said state Senate Minority Leader Audrey Gibson of Jacksonville. “The conservative majority that has ruled the state government for more than 20 years are only interested in preserving this unsustainable status quo and protecting their own power.”

Her party’s agenda, she said “realizes that the focus of our state government must be on the people who make Florida work every single day. People like our teachers, retirees, nurses and small business owners.”

“You call it vouchers to help minority students, and you march black kids around the Capitol, and you say that everything that you’re doing is for them,” Jones said.

Florida Democratic Party Chair Terrie Rizzo said DeSantis “showed his true colors today as a far right politician who is determined to destroy our public schools, demonize our immigrant communities, and do nothing to expand access to health care. On education and immigration, DeSantis sounded more like a protege of Donald Trump and Betsy DeVos than a governor who will put Florida first.”

DeSantis’ 30-minute speech also wandered far afield of Florida, with the new governor espousing his views on Venezuela, Cuba and Israel. He says he’ll be leading a state delegation to Israel.

This story was initially published March 5 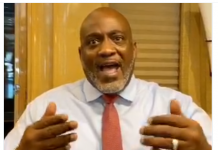 Amendment 4 leader not granted pardon but can still vote; announces aid to help restore other voters

This is ridiculous. It’s been 6 months since Category 5 Hurricane...