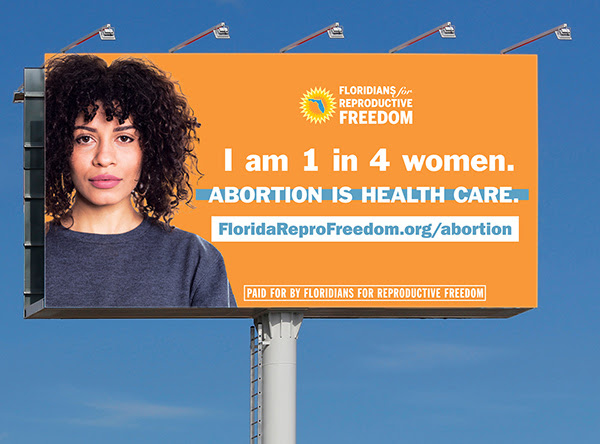 State lawmakers returning to Tallahassee next week for their annual session will be greeted by a series of billboards promoting reproductive rights for Florida women.

The Floridians for Reproductive Freedom coalition has launched the advertising campaign.  Lawmakers have filed a series of bills that aim to sharply restrict a woman’s right to choose to end a pregnancy.

The reproductive-rights coalition plans a dozen billboards in the state capital as the 2019 session begins on Tuesday. One mobile billboard will move around the Capitol complex.

Other billboards will be on major Florida highways, including four signs on Interstate 10 between Tallahassee and Interstate 75. Signs will also be placed on the Florida Turnpike.

The signs include an image of a woman with the message: “I am 1 in 4 women. Abortion is health care.”

“Our goals are to support the one in four women who have had, or will have, an abortion in this country and remind leaders in our state that abortion care is health care,” said Charo Valero of the National Latina Institute for Reproductive Health, a member of the coalition. “Women take care of their families by taking care of themselves and abortion is health care. It’s as simple as that.”

The group also opposes another restrictive anti-abortion bill filed by state Rep. Mike Hill, that would prohibit a woman from getting an abortion if a physician detects a fetal heartbeat. A fetal heartbeat can be detected as early as six weeks – so early that a woman may not know she is pregnant. Sen. Dennis Baxley, an Ocala Republican, has filed the Senate measure.

“These bills are rooted in opposition to safe and legal abortion – not credible medical evidence,” said Laura Goodhue, executive director of the Florida Alliance of Planned Parenthood Affiliates, another member of the coalition. “This is yet another example of politicians inserting themselves in the most private and personal medical decisions best left between a woman in consultation with her doctor, her family, and her faith.”

The fate of seriously ill prisoners: shackled to a hospital bed...