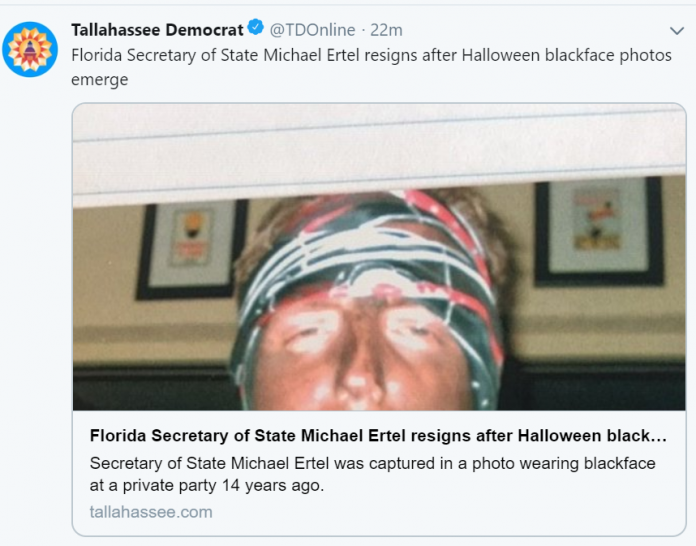 Florida Secretary of State Michael Ertel abruptly resigned Thursday after a newspaper published pictures of him in blackface and dressed for Halloween as a Hurricane Katrina victim shortly after the disastrous 2005 storm hit New Orleans, killing more than 1,800 people.

Ertel, who was named secretary of state by Gov. Ron DeSantis Dec. 28, appeared as a white man in blackface and red lipstick, wearing earrings and a New Orleans Saints bandanna, according to the report from the Tallahassee Democrat newspaper. He wore a purple T-shirt that had “Katrina Victim” written on it.

The newspaper sent the pictures to DeSantis’s office on Thursday. And at 1:59 p.m., Ertel submitted his terse resignation by email.

“I am submitting my resignation as Florida secretary of state effective immediately,” the message said. “It has been an honor to serve you and the voters of Florida.”

“I think he’s done a lot of good work but at the same time I’ve got to have an administration that is going to be focused on what matters to Floridians,” DeSantis said. “And I don’t want to get mired into kind of side controversies and so I felt it was best to just accept the resignation and move on.”

“But at the same time,you know, I want people to be able to lead and not have any of these things swirling around them. So I felt it just best to move on,” he said.

Ertel had already played a key role in the early weeks of DeSantis’s administration. He provided a scathing letter outlining numerous problems with the Palm Beach Supervisor of Elections Office that DeSantis used as his basis for removing Elections Supervisor Susan Bucher from the job last week.

Casino opponents pledge lawsuit if FL Legislature expands gambling, but how strong is the case?

Amid final stretch of 2020-21 school year, districts may change mask protocols after new...

Despite new tragedies, AG Moody remains firm in her opposition to...