With alt-right conspiracy theorists flocking to the Broward County elections office in what they ominously call a “Patriot Surveillance Project” protest, Gov. Rick Scott summoned the media to the Governor’s Mansion last Thursday for an unhinged partisan campaign speech.

He warned about “unethical liberals” “stealing this election” and announced he was calling the Florida Department of Law Enforcement to investigate. Then Scott refused to take questions, turned his back on the cameras and stalked into the mansion, a building the state officially touts as “The People’s House.

It’s not just unseemly for candidate Scott to be using his official job as governor to mount brazen partisan attacks and direct law enforcement to go after his political enemies, it’s downright creepy. Just watch the peevish governor seething on the mansion portico last week and try not to hear evil Mr. Burns on The Simpsons hissing at his sycophant assistant: “Smithers, release the hounds!” (For the role of Smithers, we nominate Panhandle Congressman Matt Gaetz.)

No doubt that it’s annoying for Oligarch-in-Charge Scott to suddenly be prevented from taking his victory lap in his (apparent) win over U.S. Sen. Bill Nelson. This was supposed to be the governor’s Going-to-Washington Moment. Now a pesky state law stands in his way – the one that mandates an automatic machine recount for any race that has a .5 percent margin, and hand recounting for any race with a .25 percent margin. The margin in the Scott-Nelson race is .15 percent.

Scott and the Republicans hold all the key levers of power both in Florida and in Washington. Scott appointed the Florida Secretary of State. He appointed the head of the Florida Department of Law Enforcement. He governs in step with a Republican-led Legislature and the Republican Florida Cabinet. He is a friend of President Trump, the Provocateur-in-Chief who has inserted himself into Florida’s election by hurling insults about our state and making wild claims for the world to see.

The only political weak spot in the Republicans’ supreme dominance is that local elections supervisors are elected, and the one in Broward – Brenda Snipes – is a Democrat with a sad history of serious problems in her office, especially the way she handled ballots after a 2016 Democratic Congressional race. Gov. Scott’s campaign has filed several lawsuits against her in the past week, including Sunday’s emergency injunction request to seize voting machines.

Scott has long had the authority to remove Snipes after problems were revealed, but he didn’t. For this election, the Scott administration deployed two state elections division staffers to monitor Snipes’s operation on election day and the days after. The monitors did not report any problems on the ground and have yet to issue any report publicly.

“Our staff has seen no evidence of criminal activity at this time,” Department of State spokeswoman Sarah Revell wrote in an email to media on Saturday, and assertion she repeated Sunday.

Even as his own administration contradicts him, Scott continues his fraud claims, stoking a flood of conspiracy theories peddled online by the alt-right.

“No ragtag group of liberal activists or lawyers from DC will be allowed to steal this election,” he spat during that bizarre campaign appearance at the mansion, mentioning that his opponent Nelson has brought in “one of Hillary Clinton’s lawyers.” (These recount lawyers get around –  the lawyer who represented Republican George W. Bush during the 2000 presidential recount, Barry Richard, is now representing Democrat Andrew Gillum in the Florida governor’s race recount.)

The multi-millionaire Scott is fundraising off the election mess, too, sending out emails telling campaign supporters they’ve hired a “top team of lawyers” for the recount.

“Please donate today to help us keep unethical liberals from stealing our Senate seat in Florida,” the campaign pleads in a Nov. 10 fundraising appeal.

We can all plainly see that Scott is using his position as our governor to influence a disputed election in which he’s a candidate. That’s a flat-out conflict of interest. Having your campaign staff summon the state’s media to the Governor’s Mansion in the midst of a highly important state election (and then refusing to take any questions) is out of bounds.

By law, Scott is only Florida’s governor through January 8. He should acknowledge he has a conflict, step down now and move out of The People’s House. That way, he can do all the vociferous politicking he wants – just not on our dime. 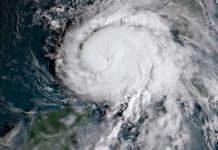