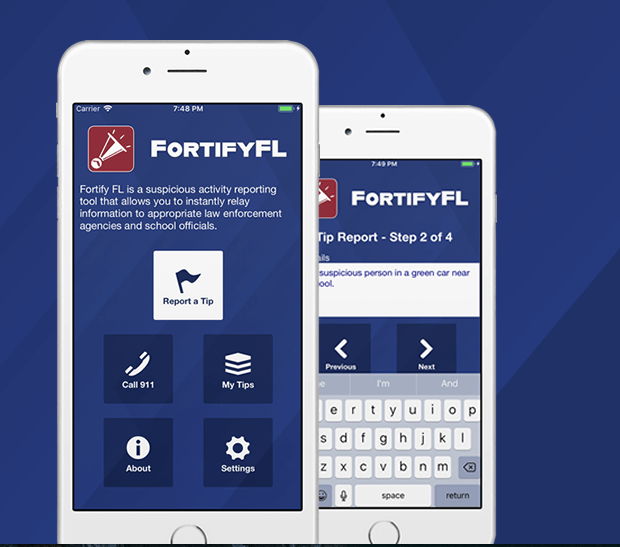 A new state-financed mobile app launched to allow students and community members to report “suspicious activity” anonymously is already raising questions about costs, participation and whether the app will be a helpful tool to thwart gun violence and keep schools safe.

“I think it is a component –one piece of the puzzle that may be helpful, but how helpful?” said Angie Gallo, a vice president at the Florida PTA.  “I think we have more questions than answers right now.”

The app has been one of the least-noticed provisions in a broad piece of legislation stemming from the chilling shootings in February at Marjory Stoneman Douglas High School in Parkland, Florida, where 17 students and staff were killed.

The mobile app program rolled out this week – it was required to be put in place no later than January 31, 2019, under the Marjory Stoneman Douglas High School Public Safety Act.

The program is designed to relay harmful or violent information to law enforcement agencies and schools, using the app on Android and Apple devices. If they prefer, students and others can disclose their identities when providing information.

The Florida Phoenix also found that the Florida Department of Law Enforcement – a key player in launching the app — agreed to a one-page contract amendment to allow private schools to participate in the mobile app program, even though the program is funded by public dollars.

The amendment, agreed to in late September, also increased annual licensing fees for the program from $57,200 a year to $77,200. The contract overall totals $314,400 for three years, with an option to renew for another three years, according to the contract documents.

The company that won the contract is Canadian-based CutCom Software Inc., doing business as AppArmor. AppArmor works with other Florida entities, such as University of Florida, which has a “Gator Safe” mobile app.

FDLE spokeswoman Gretl Plessinger said she was not able to provide as many details a possible about the program because state offices in Tallahassee are closed because of hurricane preparations.

As to why FDLE is including private schools in the program, Plessinger said, “We wanted to make it available to as many students as possible.”

At issue is what kinds of things teens might disclose. What if two kids get into a fight and one decides to report suspicious activity on purpose –and anonymously. What if a student believes a peer is dangerous or mentally ill but that turns out not to be true?

Plessinger said the information will be treated the same way as law enforcement treats other kinds of tips, whether they come from emails or landline phones.

Time will tell on how the program will work out.

Other little-noticed provisions in the Marjory Stoneman Douglas High School Public Safety Act have proved to be controversial.

The Phoenix earlier wrote about a provision requiring that each student – at the time of initial school registration – must disclose if they’ve been referred for mental health services. Parents and guardians will typically fill out and sign the registration forms.

A number of critics and advocacy groups assailed the requirement, saying it stigmatized students with mental health issues, but it is still on the books.

As to the mobile app program to relay “suspicious activity,” even advocacy groups well versed with The Marjory Stoneman Douglas High School Public Safety Act say they’re not very familiar with the program, saying they were focusing on other controversial issues in the legislation.

“I don’t really have the full knowledge of how this app is going to work or what our position is,” said Patricia Brigham, president of the League of Women Voters of Florida.

The app is now available across the state, according to a press release posted Monday and a news conference that included Attorney General Pam Bondi and officials from FDLE and the Florida Department of Education.

“When I spoke to parents, teachers and students following the Marjory Stoneman Douglas High School tragedy, I learned there was a gap in communication between law enforcement agencies and school officials,” Bondi said in a statement. “After Parkland, I made it my mission to ensure that when students provide information that could potentially save lives, there would be a centralized tool they could use to quickly send that information to the right authorities. FortifyFL is designed to do just that.”

Why haven’t FL officials told the public that a patient was...