While grappling with Mexico’s booming specialty crops, Florida also struggles because consumption of fresh fruit and vegetables by Americans is notably down, said Hodges, who works in the Food & Resource Economics Department at the University of Florida.

For years, farmers, scientists, economists, academicians and politicians have been concerned about what’s happening to fruit and vegetable crop production in Florida.

But fixing challenges in the industry – from labor costs, labor shortages, declines in profits and technology issues – isn’t easy, and there are concerns that the state’s strawberry industry, for example, could collapse in a decade if issues aren’t addressed, according to a 2017 story by the Plant City Observer.

“It’s not quite the deal we had hoped it would be,” Florida Agriculture Commissioner Adam Putnam said last week on Fox News.

Florida farmers for years had been pushing for restrictions on some Mexican exports, complaining that its government has been “dumping” fresh produce into the U.S. market at prices below the cost of production. That has severely hurt farmers in the Southeast, especially during the winter months.

The industry had high hopes that U.S. officials would be able provide such restrictions. But that didn’t happen, in part because of the complexities of production seasons, imports and exports.

Some states elsewhere simply were not inclined to help Florida and alienate Mexico.

Mike Stuart, president of the Florida Fruit & Vegetable Association, echoed the industry’s reaction, saying, “This is not the outcome we have worked for.”

At the same time, Stuart said his organization will continue to work with the Trump administration “on solutions to stop Mexico’s unfair trading practices and to help our fruit and vegetable industry survive.”

Meanwhile, given the disappointment over the revised NAFTA negotiations, Florida’s two U.S. Senators warned the Trump administration that they might have a hard time getting the revised pact approved by Congress.

“Mexican growers have used every trick in the book to get around U.S.trade rules, much at the expense of Florida growers, who are uniquely impacted by such behavior,” Senators Marco Rubio and Bill Nelson wrote in a joint statement last week.

“Without just relief, Mexican producers will continue to drive our growers out of business and eventually take full control of the U.S. market during the winter,” the Florida senators said.

“We must ensure that such an outcome does not occur.”

To understand how lopsided the crop production situation has become, look at the numbers related to strawberries:

That means imported strawberries from Mexico became a growing and significant share of the U.S. market, while Florida’s share declined.

Despite a diminishing market share, officials in the strawberry industry say their product still provides a lot of economic activity to their communities.

“When you look at the economic impact that this one single piece of fruit has to eastern Hillsborough (County), it’s a $1 billion economic driver,” said Kenneth Parker, executive director of the Florida Strawberry Growers Association.

Mexico’s production of other crops, such as tomatoes, has also increased dramatically in recent years, predominantly because of the Mexican government’s investment in “largescale greenhouse production facilities and other types of technological innovations,” according to a Congressional report written last December.

Professor Zhengfei Guan, an assistant professor at the University of Florida’s Gulf Coast Research and Education Center, says the U.S. government should help the tomato industry by developing labor-saving technologies such as mechanical harvesting to make the industry more competitive again.

Florida lawmaker Matt Caldwell, now the Republican nominee for Florida’s Commissioner of Agriculture, told News Service of Florida that if elected in November, he would expand the Department of Agriculture’s export-promotion efforts while working with federal agriculture inspectors to monitor Mexican imports entering Florida.

The Democratic nominee in the Agriculture race, attorney Nikki Fried, told the Phoenix that while Florida farmers have been feeling the negative effects of NAFTA for years, “tearing it up isn’t going to bring back the farms that have closed down or jobs that have been lost.”

“The Trump administration’s trade war has put the Florida agriculture industry in a position of uncertainty and instability,” she says, adding that if elected in the fall, she’ll promote the use of industrial hemp that can help out struggling farms.

“As a commissioner,” Fried says, “I’ll work to expand the existing pilot program into a full-fledged, robust industrial hemp industry that will create new opportunities for hardworking families.”

As to Florida Gov. Rick Scott, the Miami Herald asked the governor a few days ago about NAFTA negotiations and the impact on Florida farmers, and Scott didn’t directly answer the question.

Scott is running for a U.S. Senate seat, against current Sen. Bill Nelson.

Later, a campaign spokeswoman for Scott issued this statement, according to the Miami Herald:

“I want more trade. We have 15 seaports, we’ve invested $1.4 billion in our ports and added over 300,000 trade jobs. I want to make sure we continue to get trade. As the Trump administration has been dealing with trade around the country, what I’ve been doing is, as it impacts Florida businesses, I’ve been talking to Bob Lighthizer, who’s the federal trade representative, and letting him know the importance of free trade and how it’s impacting Florida businesses,” Scott said. “My goal would be if we can get fewer tariffs I think Americans should win.” 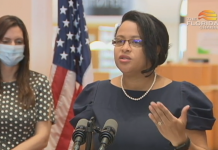