In what has been Florida’s most competitive Democratic gubernatorial primary election since the early 2000s, polls show that former U.S. Rep. Gwen Graham is the front-runner in the five-person contest that ends tonight.

That’s despite what appears to be an intense surge of support in the polls in the past week for Tallahassee Mayor Andrew Gillum. Gillum hopes his coalition of progressive, young and minority voters can get him over the top.

It’s not inconceivable. With such a crowded field of competitive candidates, the eventual winner may not need a clear 30 percent of votes to win. That leaves all five candidates – Graham, Gillum, Philip Levine, Jeff Greene and Chris King – hoping that they still have a chance.

Graham has been sounding more confident in recent days about competing against whomever emerges as the Republican nominee in the general election.  She told reporters in Tallahassee last week that she looks forward to working with what will likely be a GOP-controlled Legislature, adding that if she finds state lawmakers obstructing her goals, “I will find a way to go around them.”

As the daughter of Florida Democratic party royalty – former Florida Governor and U.S. Senator Bob Graham – Gwen was able to secure much of the party establishment’s support early on. She is a political centrist who took some conservative votes during her one term in Congress, and remains a reminder to some Florida Democrats that moderates haven’t always found success at the polls when they run for governor (i.e, Charlie Crist, Alex Sink, Jim Davis, Bill McBride.)

“Some folks in this race believe we have to run Republican-lite to win Florida,” Gillum told a crowd in Tampa while appearing with Bernie Sanders earlier this month. “I say no. The way we win is by giving our voters something to vote for, not just against.”

While Gillum’s recent rise in the polls coincides with Sanders appearing with him in Central Florida’s key Interstate 4 corridor, the work that progressive groups like Tom Steyer’s NextGen Florida have put into his campaign can’t be overlooked.

The San Francisco philanthropist put $1 million into Gillum’s candidacy in late June, which translated into more than 60 full time staffers working on behalf of his campaign. Last week Gillum received another $350,000 infusion from Steyer, plus $250,000 from progressive billionaire George Soros. Soros previously donated close to a million dollars to Gillum.

While polls show Gillum with the second-biggest momentum, candidate Philip Levine remains well positioned. The former Miami Beach Mayor began introducing himself statewide voters with a series of well-produced television ads last fall, and by late spring had a ten-point lead over Graham in a Public Policy Polling survey.

And then Jeff Greene got into the race.

The Palm Beach billionaire filed campaign documents on June 1 and began to massively blanket the electorate with both television ads and direct mail pieces that instantly brought his name recognition up with the other more established candidates.

The conventional wisdom has been that Greene’s entry has been most damaging to Levine’s ascent, since the two wealthy South Florida businessmen have subsequently spent considerable time criticizing each other in television ads over who has been chummier with President Trump.

Levine’s most recent ad that aired this weekend statewide again brought up how much he has opposed Trump.

“This election is about who can beat Donald Trump and his little mini-me, radical Ron DeSantis,” Levine said in Tampa earlier this month.

With 14 regional offices around the state, Levine boasts that his campaign has knocked on over 300,000 doors, and his ground game could be his secret weapon if he ends up winning the contest.

Greene has run the most unconventional race in the campaign, and the most controversial. His late entrance exposed the fact that some Democrats felt that there was still an opening for another candidate in the race (remember the bipartisan ticket that former Treasure Coast Congressman Patrick Murphy and Republican David Jolly floated in April?) and his huge expenditures of campaign cash immediately pushed him into contention, culminating in one poll that showed him tied with Graham in mid-July.

Then Greene began going negative, questioning Graham on her environmental bona fides and Graham pushed back hard against Greene, as did much of the Democratic Party establishment. Greene then began attacking Levine, and vice versa. The net result, many analysts believe, is that those attacks have hurt both candidates.

Polls indicate that  Winter Park businessman Chris King is trailing the pack. King ran on a progressive platform, advocating to abolish the death penalty in Florida and to impose a  6-percent sales tax on bullets – positions to the left of the rest of the field. He also spoke in support of free tuition for community college and trade schools. But he’s ultimately been unable to break through in the polls, with the majority of progressive voters who would seemingly support his policies leaning towards Gillum instead.

There has been tremendous interest in the primary to date. The Florida Division of Elections website reports that more than 1.86 million people have voted already, more than participated in the 2016 presidential primary election.

The polls close at 7 pm Eastern in most of the state, with polls in the Panhandle closing at 8 om Central time. 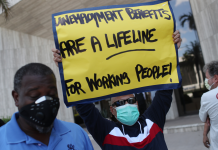 Power to the people? Lawmakers want to ditch a state commission...