An angler reeled in a bluefin tuna as heavy as a Grizzly bear in May 2017 off Florida’s Panhandle coast from a boat called “You Never Know.” The giant tuna weighed 826-pounds, 8-ounces.

Note: A previous version of this story indicated Whitley caught the fish in “May.” It has been updated to read “May 2017” to avoid confusion. 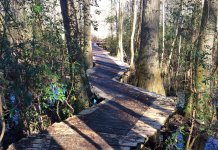 State Clemency Official to Black Applicant: How Many Kids Do You...